Posted by Ruby Software Editorial Team
Articles, Ruby On Rails
Leave a comment
Programming is all about predicting the future. It is about refining the social process in the easiest of formats, delivering better user experience and instant gratification for people. But when it comes to predicting the future there are two things that we anticipate – the things which we want to happen and the things that happen in real. Over the last two decades, people thought the internet and computers will be the pioneers of social advancement. But we hardly knew that technology will seriously evolve to become a deciding factor in modern business.

Programming is the framework that instructs the hardware to do preferable things using modern web and mobile applications. They are being conceived by programmers using source codes, without which hardware become nothing less than metal sculptures. Ruby on Rails is essentially a full stack framework, which intends to develop more than a static website and delivers users real-life experience in terms of web experience. ROR is a modern missionary that develops more dynamic, robust and interactive websites.

Ruby On Rails the future of programming?

Released in 2005, Ruby on Rails (ROR or generally termed as ‘Rails’) is a server-side web application framework written in an interpreted and high-level programming language called Ruby – founded by Yukihiro Matz Matsumoto in the mid-1990s. The foremost thing to known in Ruby on Rails is to sense the difference between Ruby and Rails. While ROR is a language-specific framework for web development, Ruby is the language in which the codes are written. You might be already familiar with coding languages like HTML, CSS, JavaScript.

Over the past few years, Ruby on Rails has become one of the most popular open source web application frameworks. It is conceived in an architectural pattern ‘Model View Controller’ (MVC) which develops the user interfaces into three interconnected parts to ease down the way of presenting the information to the user. It functions on web standards such as JSON, XML for data transfer and HTML, CSS, and JavaScript for user interfacing. ROR has its strong influence on in many frameworks like Django in Python, Catalyst in Perl and Sails.js in Node.js.

In the 2000s, the ROR framework stormed into the web app development by implementing features like database table creation, migrations, and scaffolding of views. The framework composes of code libraries that give web application and website developers custom-tailored solutions for time-consuming tasks in developments. Rather than writing single codes, developers can refer the framework to find the right code for common functions (like building menu, columns, tables or forms) that can be leveraged while developing a website. 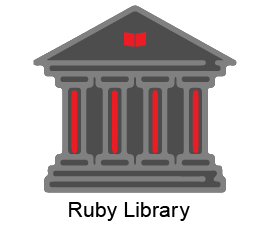 Advantages of Ruby on Rails

There are a plethora of options to consider which is the right programming language and framework to choose for your website. In terms of web development, you have to evaluate the project category, requirements, and functionalities, the availability of libraries and the cost of the undertaking. While considering these aspects, Ruby on Rails comes with a hell lot of benefits and advantages for you to choose from the many, especially if you are a seed stage startup or a small scale business establishment. Let’s have a look what makes ROR stand out from the rest.

Ease of learning – ROR framework is one of the easiest to learn, comprehend and read. It relies on layman English and uses domain specific language. The syntax is in English which gives a more native and logical feel to the developer while writing the codes. Developers need not need to write separate comments or help texts to understand each others code. Even non-technical persons can easily learn and adapt to Ruby easily than they can imagine. The libraries and plugins within the Ruby programming help it easier for beginners to understand and learn.

MVC Architecture – ROR operates on the principle of Model View Controller architecture that plays a crucial role in breaking up complex structures. It has three interconnected layers, which consists of a coding structure that is made to consume huge application data. The model will grasp the business logic of the application and deploy the data to break up the complexity. In the view side, the embedded Ruby codes contain HTML files, which determines how users will interact with the data. It has many formats like RSS, XML, PDF, etc, which easily distributes the information needed for the user.

Time efficient – Since Ruby has features like MVC architecture, which comes with a clean interface, the development process will be a lot easier and time-saving. Lack of hardcore coding and easy learning process makes it easy for developers to master the language in no time. The ruby libraries are rich with ready-made plugins and custom modules that make it easy for developers to implement the functionalities and features of the app in no time.

Fits the budget – ROR is an open source framework language accessible under MIT license introduced by Massachusetts Institute of Technology, which means there are no restrictions in the commercial use of Ruby on rails. The free license entitles you to use the software for any purpose including commercial and profit oriented. As a business owner or developer, ROR enables you to cut a lot of overhead costs. The framework is free to run on Linux, which again is open source. Instead of using Microsoft and Java, it high time for you to consider Linux and Ruby for your website or application development. 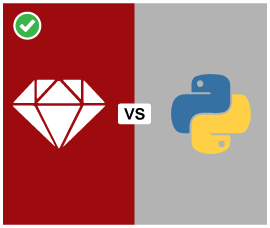 Ruby on Rails vs Python

There are several coding languages used today by developers which makes it hard to choose between the options. One of the main comparisons among them is made between ruby on rails and python. As I said, Ruby on Rails framework is built on Ruby programming language. Similarly, Django web framework is built by Python programming language. While ruby has repositories called RubyGems, Python has Package Index. Though both of these languages seem to be visually similar, they are entirely different concepts when it comes to addressing user needs.

The core areas of Python is academic and scientific programming. It belongs to a more bigger picture of the world. It belongs more often to the scientific community dealing with big data and all. It’s mainly framed for data-heavy sites and servers with high traffic exchange. Python is fastly operating with math, big data and scientific calculations, which has made it highly preferred by the data scientists in prototyping and analyzing data.

Ruby on the other hand suits to the web development and functional programming. It is more scalable and helps in decoding complex structures effectively. If you are planning to implement complex applications with high traffic consumptions, then Ruby can become your choice. The main trademark of Ruby can be the freedom and flexibility to get things done in a million ways, whereas Python is the one right way to do things, emphasizing simplicity over flexibility.

While Python can be attributed to easy to learn, conservative, readability, speedy and efficient, Ruby matches it with easy to learn features, more expressiveness, efficiency, elegance, and powerfulness. Some of the major applications that operate in Python are YouTube, Instagram, Spotify, BitTorrent, and Reddit. Some of the major Ruby applications are Basecamp, Hulu, Twitter, Github, and Airbnb.

While Python has rich built-in data types in the form of list, tuple, set and dictionary, Ruby has array and hash.

Python uses modules, nested functions and classes to avoid namespace collision. But the approach in Ruby is collision-prone.

Ruby has three classes to deal with dates and time like a year-month-date tuple. While Python has awareness in the format of ‘naive’ vs ‘aware’ date-time objects.

Python distinguishes “Unicode strings’ and ‘byte-strings’ with no determined encoding. While Ruby treats all strings as byte strings with encoded semi-hidden flags.

Every programming language and framework is defined by the purpose and vision in your mind. All these programming languages are modern high-level languages, focusing on making a developer equipped with the ability to work out and implement things fast without any restrictions. Every framework is rooted in their philosophies rather than just evaluating them on the basis of outcomes. Though the outcomes might be different, we cannot question that each of them is woven in a common fabric to write clean, concise and readable codes. In that common objective, it’s commendable that these platforms have seamlessly helped in refining technology and user experience.